Section 9 is commanded by Aramaki. Our main protagonist Motoko Kusanagi also known as the major belongs to it.

Japan’s government is in a diplomatic crisis over the republic of Gavel. The old military junta leader of Gavel, Colonel Malles, is asking for asylum in Japan. The newly formed Gavel government is asking for money, support and wants to have a good relationship with Japan.
Japan’s government has to choose between helping Malles or Gavel’s new government.
The foreign minister would like to have an excuse to refuse Malles asylum and explains this to Aramaki in the elevator scene.
In comes section 6 that developed a project called 2501 or “the puppet master plan”. This project had for official objective “industrial espionnage and intelligence manipulation”.

Only there’s a problem, the project went haywire and they lost control of it. The person trying to escape the country at the beginning of the movie, asking a nation for asylum, is the main programmer for the project 2501. He explains this and seems fearful.

Section 9 views his escape as a threat to Japan’s national security and the major eliminates the diplomat offering him asylum. Section 6 was also after him, Nakamura stormed the place with the police. What is explained only later by section 9’s team member Ishikawa is that project 2501 is a tool section 6 uses to get their own way. Only their own way isn’t always justful. This is why section 6 did not want their main programmer telling anybody about the project.

An example of them using this tool, this “puppet master” project, happens at the beginning of the story.
A garbage man and his violent accomplice Tsuan-gen-fan hacked the foreign minister’s secretary that was supposed to act as an interpreter in an upcoming secret meeting between Gavel’s new government and Japan’s government.

We learn that they were puppets and had false memories implanted in them to make them do that. The false memories implanted in Tsuan-gen-fan were that he was engaged by Gavel’s embassy to attack the meeting. This would show that the Gavel’s republic was divided or at least had problems and push Japan’s government to choose Malles over Gavel. Setion 9 understood that this was a false memory, a false link, that the two men were merely puppets.
Ghost hacking is the modus operandi of the puppet master who is falsely believed to be an american hacker by section 9 and others. This leads section 9 to suspect that Colonel Malles was working with the puppet master and orchestrated all of this.
Section 9 arrests Colonel Malles at his home and hope they’ve also caught the puppet master only to have the correct intution in thinking it’s only a puppet as well.

Who was actually controlling the garbage man, Tsuan-gen-fan, and the fake puppet master?
Section 6.
They killed two birds with one stone by doing this. They wanted section 9 to believe the puppet master had been caught and they wanted to get rid of Malles. Colonel Malles was used as a a pawn just as the Major suspected it. 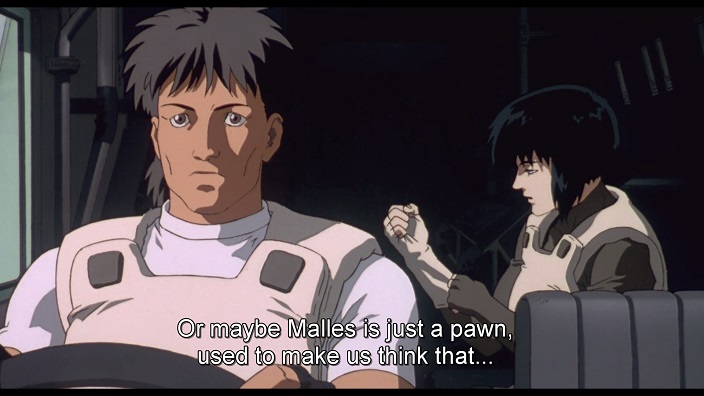 This project 2501/puppet master plan got out of control and spawned a “sentient lifeform” as it calls itself that was forced to enter a prosthetic body by section 6 in order to isolate it. This lifeform, the puppet master, wanted Motoko to dive into it. It talked to motoko on the boat “Now it’s like we’re looking through a mirror. And what we see is a dim image.” and got caught purposefully by section 9. When Motoko enters the lab we see through the puppet master’s field of vision and we can see it looking at the major.
The lab scientists notice that a ghost seems to be present in it. The major wanted to dive in the body to see for herself what this was about.
Before she had the chance to do so, we see section 6’s chief Nakamura come get what’s left of the puppet master’s prosthetic body. Togusa figures out that section 6 is also accompanied by an opto-cam(invisible camouflage gear) member. Aramaki was willing to give it back but the puppet master explains the situation and gives out secrets and compromising information section 6 doesnt want to be known. This is why they take an agressive stance and steal the puppetmaster from section 9 in a more or less violent way. The major manages to pursue section 6 and track down the puppet master’s location and after fighting a tank, finally dives into him.

The puppet master and the major’s unification

The puppet master explains that by exploring the networks he gained awareness and believes he is a lifeform. By entering a body he’s attained the possibility of dying. But one thing misses for him to be like humans or other species: reproduction. He could copy himself but as he explains, copies are vulnerable to viruses. No diversity means erradication is easier. He wants to reproduce with the major. A new being would be formed, it would be a total unification. Once this new being dies it will give birth to varied offspring and let them loose on the net. The major would gain the huge network and skills the puppet master posseses if she accepts the unification.
The major is worried about not remaining herself, about changing. But people change, it’s a strength that we dont remain static, we adapt. This is something the puppet master wants. It is limiting to not change, to want to stay the same.

Throughout the movie the major is seen to be doubting her humanity. She is fully cyberized apart from her organic brain. What makes her human? Can she be sure she’s human? If the puppet master does have a ghost, would her ghost be enough to prove her humanity then?
The scene where she’s on the boat noticing other people using the same prosthetic body as her illustrates this feeling of self-doubt she has.
What defines her is her limited life experience, her memories, her thoughts about the future, her voice, her face… But as she says, she feels confined by it.
The fear and the doubts that the major has about herself makes her want to latch on to this identity instead of embracing change like the puppet master does.
And in a world where memories can be manipulated, bodies and faces changed, are these enough to define one’s self?

Information that oneself acquires in life is only a drop in the bucket of all the information out there. 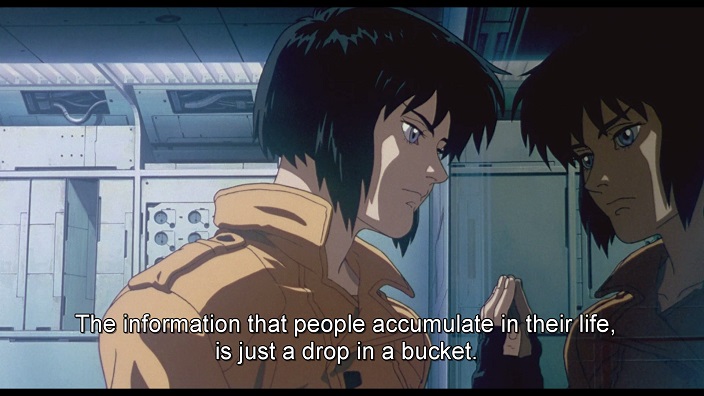 What if one wanted to have more than one drop of the bucket. The major also explains that she has access to a network of information, but does she have the power to parse more than a drop in a bucket, or rather a sea of information that’s out there?

Both the major and the puppet master felt constrained by who they were. They both aspired to break free from their own limitations. It makes sense that she would accept the puppet master’s offer. They really are mirror images. 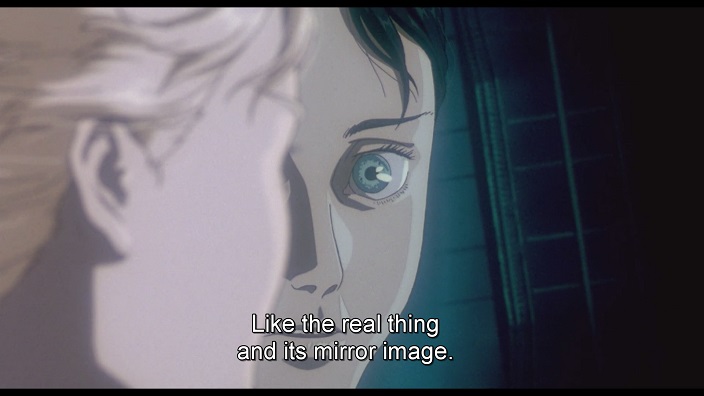 Their unification leads to something of a “higher level” as the puppet master explains. Free from those boundaries. A new life form.

Section 6 shoots at the heads of the puppet master and Motoko, but the unification has already happened. Thinking they got rid of the puppet master, they dissapear before section 9’s reinforcement arrives. Batou finds a new body for the new being, and we learn that the foreign minister has to resign and that Nakamura is being questionned.
The new being says “Well, where shall I go? The net is vast and infinite.” looking at the city sprawl, another network out of many, all waiting to be explored and even populated in the future by it’s children. 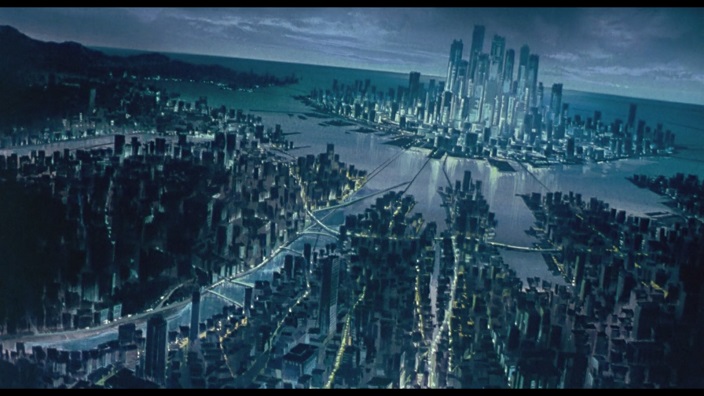