The purpose was to reestablish and maintain the barrier between the wired and the real world. Lain was put into a fake family. Lain’s fake father (Yasuo) who works for tachibana labs, even tells her that the wired is not to be confused with the real world (in episode 6).

Everything starts with Chisa’s suicide and the strange emails she sends from beyond the grave. Chisa did not have a fun life, no friends, no connection, no reason to stay. She decided to get rid of her body and continue her existence on the wired, just like Eiri. She’s the reason Lain turned on her navi (computer) for the first time. After reading the email sent personally to her, Lain goes on to investigate. Definitely a weird situation.
Lain gets invited by her friends to go to cyberia, a club. They tell her that they saw someone who looked exactly like her the previous night. This Lain that they saw was actually evil Lain.

Different Lains and the knights

There are 3 different Lains : wired Lain, evil Lain and human « normal » Lain. The writers even had to write her name 3 different ways to avoid any confusion.

Evil Lain is the one that smiles and laughs diabolically. Wired Lain is the confident and brave one that exists in the wired. And normal human Lain is the Lain in human form of course.
Evil Lain could manifest in Cyberia because of the music played that alters the perception of reality. Lain demonstrates this by playing track 44 on Taro (in episode 9). Evil Lain was inciting the guy that took accela to kill himself, that’s why he went mad when he saw Lain who he mistook for evil Lain. Evil Lain clearly has an objective and is seen to be part of the Knights, a group of hackers from all around the world. They seem to want the same thing as Eiri, the disappearance of the separation between the real world and the wired. They want a maximum of people to die and live on in the wired. Their actions also point towards this goal.
Phantoma was a game created by them that linked kids wanting to play tag with another fps/dungeon like game, resulting in the death of players on either or both sides. Their hacking of the traffic system resulted in accidents. They found files that explained how the KIDS experiment worked and managed to use it to make evil Lain appear in the sky of the real world. They clearly have an interest in Lain and throughout the show try to control or even kill her. They sent Lain a psyche, a chip made by them used to immerse yourself more in the wired. They are the ones that planted the bomb in her room, this is explained by the Men in Black (MIB). They tried to make her use a chip that modifies memories. Taro admits this to Lain and explains that he works for the knights even though he’s not a member. They also are the ones that broke Mika’s mind. We can see their sign appear when the mind-meddling is going on. Also Taro conveniently makes Mika spill her drink on herself so that she uses the tissue given to her with the « fulfill the prophecy » writing. The rumor about Alice’s relationship with her teacher was also started by evil Lain and the knights.

Men in black and the representative of tachibana labs

The Men In Black invite Lain to come with them and go meet their boss, the Tachibana representative (the rep). This is when it’s explained that Lain’s family is fake. We also see evil Lain scheming with the knights to get the virtual reality goggles guy, who wanted to join them, killed. Lain also changes abruptly to an assertive and dominant personality, one similar to wired Lain. This abrupt change also happens in Cyberia when Lain tells the accela guy that « Everyone is connected ». Is this wired Lain taking control of the body of normal Lain or are Wired Lain and normal Lain really just two parts of the same being ?
We learn that Eiri has the knights for believers, making him a godlike character. This makes Lain go after them, she releases information on them and the MIB and their associates go and kill them. Even with the knights gone, the frontier between the wired and the real world is still crumbling down. The MIB think that they have been tricked by their employer who, they believe, has been in contact with Eiri. 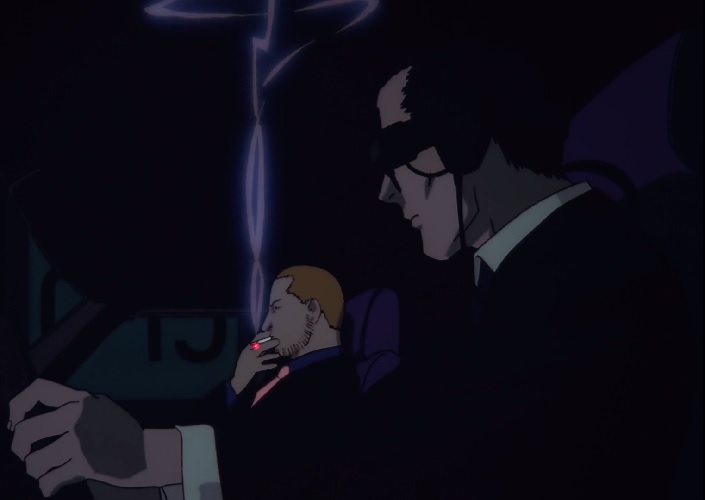 Karl shortly before his death sees Lain in the eye of his dying colleague. This is obviously evil Lain.
The MIB can’t understand the situation because they haven’t been given all the information. Lain was made with a purpose. In episode 9  Yasuo says « It’s almost over, isn’t it ? Finally.», expecting a planned outcome. The outcome being not only the mending of the frontier but also the destruction of Eiri. Although the tachibana rep didn’t seem to want the wired to interfere with reality, if Lain had to to solve these problems then that was that.
The MIB didn’t know what Lain was and even told her this, but the rep did. He knew something interesting was bound to happen and he was right. When first meeting Lain even though thoroughly opposed to the knights, he didn’t want to interfere with Lain’s actions.
« something interesting is beginning. We should just watch from the sidelines. »

Alice deeply cares about Lain and is shown throughout the series to be very kind and loving towards her. When Alice learns that Lain supposedly spread the rumor she goes to confront her. Even though she ultimately believes Lain isn’t responsible, the situation brings Lain to the brink of tears.
Lain learns from Eiri who manifests himself as a sort of geometric changing form in the wired, that she can delete the memories from people and influence reality. We already saw how she had some control on the real world when she made the Men in Black’s glasses explode. She goes on to delete Alice’s involvement in the rumor but leaves Alice’s memories intact. This in turn makes Alice scared and confused.
Eiri explains to Lain that he created her as a program in a human body to break the barrier between the real world and the wired. He tries to get her to kill herself. Lain believes in his words and nearly gets tricked. Eiri only wants to use her and have more power. The one who saves Lain and makes her realize Eiri’s lies is Alice. Wanting to know why Lain changed reality she goes to her room for an explanation. Alice makes Lain feel her heartbeat and emphasizes the importance of a body. 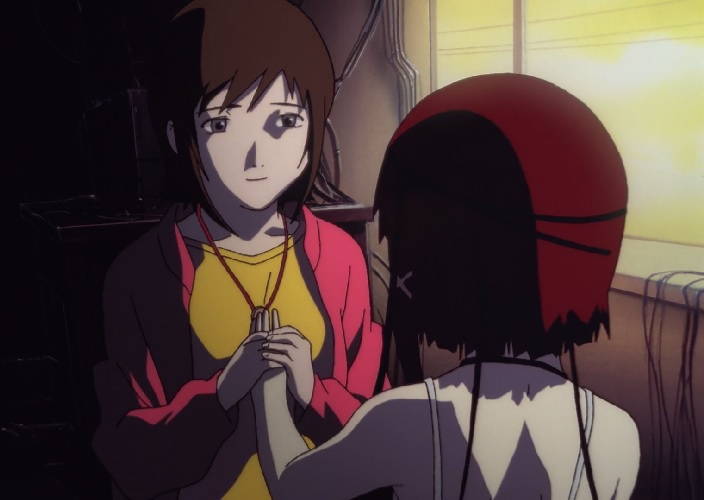 Without a body Lain wouldn’t be able to feel the fast heartbeat of her scared friend. Lain realizes that Eiri is a fake god and rebels against this supposed creator. Full of rage Eiri who can also influence the real world materializes in a human like body but gets killed by Lain. Alice witnessing all this goes crazy. Lain decides to erase her existence and resets the world to avoid Alice ever getting hurt again because of her.

Lain realises that she is the one true god. We see wired and normal Lain talking at the end but there’s no sign of evil Lain. 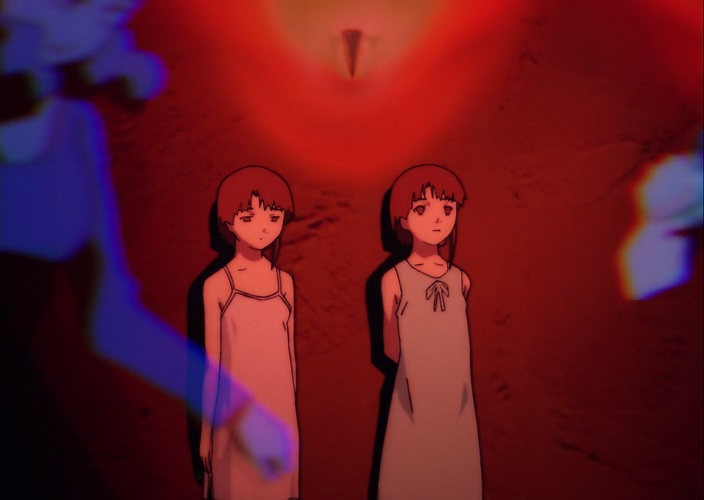 This indicates that Evil Lain was a product of either the knights or Eiri. With them gone, she simply doesn’t exist anymore. Evil Lain was just a fake Lain.
Wired Lain and normal Lain are the same. The difference is that normal Lain has just been given an ego, in other words a body. A continuous experience of the self. But wired Lain was everywhere scattered on the wired. She existed in the thoughts and memories of people.
Finally Lain makes Wired Lain disappear and manages to exist as only one ego.

This ends the explanation, I hope it can help you better understand the story and make you ask the important question : « Who is Lain ?». If you want to read more of my thoughts here they are.